Northern Ireland’s leading pro-European organisation, the European Movement in Northern Ireland (EMNI), has welcomed recent developments in the Brexit debate, from the opening of the All-Island Civic Dialogue on Brexit to the decision by the High Court that the British Parliament must vote before the UK government can trigger Article 50 to leave the EU.
Speaking following the High Court decision, EMNI Chair Ian Parsley said Northern Ireland’s special position in the UK/EU discussion, should be reflected in any Parliamentary debate before Article 50 is triggered.
“The fact is, by virtue of the birthright of the people of NI to EU citizenship even if the UK proceeds to leave the EU, it already has a special status. The issue is not whether this exists, but how to use it to maximise opportunity for all.” 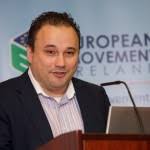 “At issue here is not the outcome of the referendum, but the need to define clearly what ‘Brexit’ means and then to determine whether the people really support it.
“The truth is it is unclear what the people voted for in June. Some thought we could leave the EU but leave free trade intact; others thought we could stop immigration; others thought there would be lots of extra money for health. Not all of these will be true. Indeed, it is quite possible none of them will be.
“That is why, in the end, our elected representatives in Parliament must be the final arbiter.”
EMNI has also welcomed the opening of the All-Island Civic Dialogue on Brexit at Royal Hospital Kilmainham, Dublin.

The event is an important part of the reaction to a potential Brexit with around 300 representatives taking part from business, employer and trade union organisations, farming organisations, community and voluntary NGOs, North and South, local Authorities in border regions, key government agencies, particularly those with a North/South dimension and academic institutions North and South such as Centre for Cross Border Studies and the Royal Irish Academy as well as universities and Higher Education Institutions. All are meeting to discuss the challenges posed by the UK’s decision to leave the EU.

Ian Parsley added: “Arguably, we should have been hearing about these concerns from these sectors before and during the Referendum campaign, but these opinions got lost in the freedom of movement debate; that said, it is vital we hear now from all those affected by a potential Brexit, and that our political representatives feed those concerns into the debate in Parliament.”

EMNI welcomes report which says implications of Brexit for Ireland, North and South, are ‘profound’
EMNI President: ‘It is in the interests of us all that the closest possible association between the UK and the EU be preserved’