Home » What Europe Does For Me

The EU has launched the ‘What Europe Does for Me’ website, providing in a one-page, open-source format, over 400 notes on citizens and social groups and a further 1400 notes on EU regions and cities, to help provide information on how the EU’s work impacts our lives at a personal and local level.

What EU has done for Northern Ireland

NI is a region of the United Kingdom, currently a Member State (until March 2019) 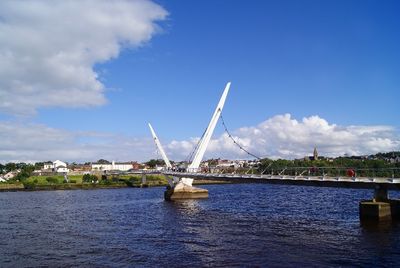 With a population of approximately 1.8 million people, Northern Ireland is the only part of the
UK to share a land boundary with another EU country.
One of the least wealthy UK regions, its economy has been dependent on industries such as food,
construction and engineering. The Good Friday Agreement (1998) involving the UK and Irish
governments and most of the region’s political parties, is recognised as having made a
significant contribution to the peace process.

Examples of projects and initiatives supported by the EU

The EU has provided extensive support to promote peace and
reconciliation.

The INTERREG VA Programme (2014-2020) covers Northern Ireland, the Border Region of Ireland and western Scotland
and is offering £248 million for projects on cross-border research and innovation
development, the environment, sustainable transport, health and social care.

Peace Bridge project, which received £14.7 million from the PEACE III programme,
saw the construction of a foot and cycle bridge connecting the mainly Catholic city side of
Derry-Londonderry with the predominantly Protestant Ebrington area. It opened in 2011.

This three-year PEACE III project, with funding of £0.47 million, introduced new
curriculum-linked approaches to the study of conflict into schools across Northern Ireland.

Bringing together post-primary teachers from across Northern Ireland
and the Border Region of Ireland, the project developed a range of education programmes to
enable young people to explore common experiences of conflict and peace building.

Northern Ireland Task Force (NITF)
was set up in 2007 by the European Commission to help the region benefit more
from EU policies.

A report on the NITF was published in 2014 and in January 2016, the
Commission announced its continuation.

What Europe Does For Me?

Click on the link below to see how the EU benefits individuals and see how current
EU programmes are trying to make a difference:

Thread on NI Protocol from @tconnellyRTE; reminder that EU is expecting UK to be ready to implement Protocol fully from end of transition... so 01.01.21

"the UK will be expected to prepare for all checks and formalities; it can't wait to see how the FTA negotiations are going" https://t.co/TV65zWfpCy

The map of the European Union.

Here’s me writing my own obituary in The Irish Times https://t.co/35r9N3cmpX

On #BrexitDay it's also important to thank our friends and colleagues in QUB, who have provided support to our events. The clarification and explanations on the #EU and also the #Brexit process provided by @QUBPolicy experts were much appreciated. @DPhinnemore @hayward_katy

While there is nothing to celebrate today itself, we would like to thank all our members who have campaigned for the pro-European cause. We are still here and look forward to working with @emireland and others. #BrexitDay

‘’But for the EU and Ireland, Brexit is inescapably a terrible loss. The EU will be weaker without one of Europe’s traditional powers. And Ireland has lost a valuable ally at the EU table.

We may be growing apart but our friendship can- must -endure.’’

We would like to thank the staff of the EC Office in Belfast, @EUOfficeNI , for all their support over the years. Today is a sad day for the staff there in the Dublin Rd and NI has greatly benefited from the work they have done in representing us to @EU_Commission. #BrexitDay

Today is a sad day for all those who believe in European cooperation and reconciliation. We leave an organisation that has brought relative peace and relative prosperity to our continent, and enter uncertain times. #BrexitDay

“The European Union is the best example in the history of the world of conflict resolution.” - John Hume

Europe, please #LeaveALightOnForUs in Northern Ireland. We WILL be back.

Today, @EU_Commission decided to ask the Court of Justice to impose interim measures ordering Polish gov to suspend the functioning of the Disciplinary Chamber of the Supreme Court. We remain ready to engage in a constructive dialogue based on fairness and respect with #Poland.